Fifteen years after 9/11, islamophobia is still on the rise

2016 marks the fifteenth anniversary of the 9/11 terror attacks, in which almost 4,000 people lost their lives. 9/11 didn’t only change New York, Washington DC or Pennsylvania; it changed the whole world. Muslims are perhaps the people who felt the backlash the most. On September 11th 2016, family members, officials and dignitaries will observe a moment of silence, again, for those who died. But how do western people view Islam and Muslims? What about the Muslims themselves: are the different communities coming closer to each other, or are they driven apart more than ever?

When dealing with a subject as delicate as Islamophobia, it’s important to realize the sincerity that numbers can display. Islamophobia can be viewed as a mere feeling of distrust or the victimizing of one’s self. There have even been voices declaring Islamophobia to be an invented phenomenon by Muslims (Huffington) themselves and their respective organizations.

While looking at the facts, we see a different perspective. Take for example the Republican Preliminaries that were held as recent as 2016. Numbers showed that more than 60% of the voters (Fusion) in the researched states (Florida, Illinois, North-Carolina, Missouri, Ohio, Alabama, Arkansas, Tennessee, Texas and Virginia) supported a ban on non-U.S. citizens who are Muslim entering the United States.

One might argue that these numbers reflect a certain demographic. Just some Alabama farmers wishing for the old days, when the Confederate Flag was raised high in the sky and people could call a grown black male ‘boy’. But that’s too easy and maybe romanticising the truth a bit. How do the general American public think about Muslims?

Jews, Catholics and evangelical Christians are viewed warmly by the American public. When asked to rate each group (Pew Research) on a “feeling thermometer” ranging from 0 to 100 – where 0 reflects the coldest, most negative possible rating and 100 the warmest, most positive rating – all three groups receive an average rating of 60 or higher (63 for Jews, 62 for Catholics and 61 for evangelical Christians). And 44% of the public rates all three groups in the warmest part of the scale (67 or higher). 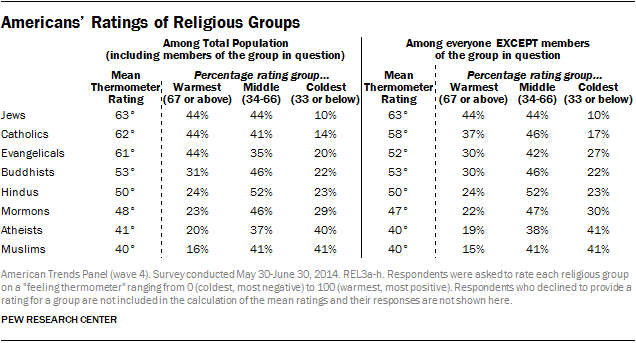 Buddhists, Hindus and Mormons receive neutral ratings on average, ranging from 48 for Mormons to 53 for Buddhists. The public views atheists and Muslims more coldly; atheists receive an average rating of 41, and Muslims an average rating of 40. Fully 41% of the public rates Muslims in the coldest part of the thermometer (33 or below), and 40% rate atheists in the coldest part.

As you can see, the Muslim is not too popular. Even the atheist scores higher and generates a warmer feeling in the conservative religious Christian nation that is America. Even the researched groups add insult to injury:

While not scoring the lowest with everyone, you can’t really say the Muslims are winning a category. The American agnost is so kind to give the highest rating of 47, and the white evangelical is critical with his rating of 30, even beating the Jewish community in its negative view. And they say Jews and Muslims don’t like each other…

So, with a couple of examples we have established that Islamophobia is definitely not a popular concept to use as an advertisement tool or a way to generate attention and pity. It’s actually a problem that exists in the world. To be fair, we’ve only argued the fact that there is Islamophobia in America, and that it is steady present even though 9/11 has happened nearly two decades ago. Maybe the United Stated and its inhabitants still haven’t recovered after witnessing the biggest attack in their history happening on their own soil. So what about other parts in the world?

Let’s take the Netherlands for example. In the 1980’s there was a politician by the name of Hans Janmaat, who rallied for an immigration stop and argued that the immigrants who already entered were bad for the development of Dutch society and were not needed nor were they of any added value. Furthermore, if he was to be in a position of power, he would have opted to totally dismiss the multicultural society and even abolish it as he said it. The Netherlands was ‘full’ and needed room to breathe and exercise its right to have her own culture. These remarks let to him being ostracized by his fellow political colleagues and the Dutch media, and was reason for the Dutch judicial system to sentence him to jail for his remarks.

Fast-forward to 2016. Geert Wilders is by far the most popular politician in the Netherlands, winning annual awards and steady growing with his Party for the Freedom, the PVV. Some of the party’s radical ideas or statements include:

These are some of the selected ideas that have been spread over the years. We can clearly conclude that these remarks are harsher and more rigorous than anything Janmaat said, besides the intended abolishment of the multicultural society, something Janmaat also stated. Wilders however, never went to jail for it. Truth be told, he has seen the inside of a courthouse multiple times, but experts and analysts were quite sceptical of the scenario that he would be convicted. And to this day, this analysis proves to be right.

PRIVATE PUBLICATIONS: Only the summary’s of our private publications publicly available. For an in-depth publication, please contact our sales department for the aquisition of the whole publication via sales@EICRI.eu.

SOURCES: Some of the sources used in our publication are listed below.

AUTHOR: This publication was brought to you by our research team. Our team consists of highly skilled writers and independent researchers who focuses on issues connected to all of our topics. The head of research on this publication is Ir. Dr. Guido van den Berg. He can be reached publicly via g.v.d.berg@EICRI.eu.

NOTE: This publication will be edited throughout the 2016 U.S. elections.